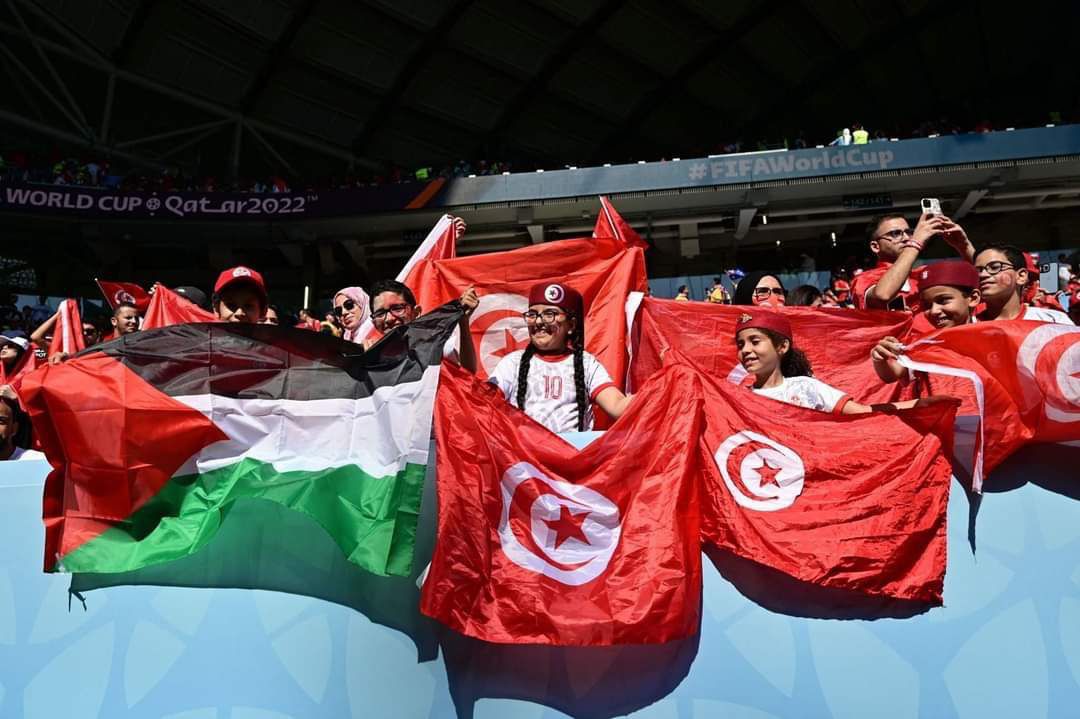 One video shows an Egyptian football fan smiling serenely as an Israeli broadcaster introduces him live on air. Then he leans into the microphone with a message: “Viva Palestine.”

Another clip from the streets of Doha this week shows a group of Lebanese men walking away from a live interview with a reporter they have just learned is Israeli. One shouts over his shoulder: “There is no Israel. It’s Palestine.”

As hundreds of thousands of people from around the world have poured into Qatar this week for the World Cup, these are among the awkward encounters between Arab football fans and Israeli journalists that have gone viral on Middle Eastern social media, one of many sources of political friction at a tournament that has not yet shaken off its myriad controversies.

For the host country, staging the World Cup has involved delicate negotiations over the presence of LGBTQ+ fans, public displays of affection and the availability of beer and wine. Less prominent in the west, but no less fraught, has been the emirate’s accommodation of Israeli football fans and media, a concession to FIFA’s rules for hosting the multibillion-dollar tournament.

Qatar does not have official ties with Israel but has given special permission for direct flights from Tel Aviv and allowed Israeli diplomats to be stationed at a travel agency in the country to give their nationals consular support. Conscious of domestic opinion, however, it has insisted the measures are strictly temporary and not steps towards a normalisation agreement of the kind signed by several other Arab states in recent years.

Though neither Israel nor Palestine are playing in the tournament, the latter has featured prominently at the Middle East’s first World Cup. Before Sunday’s opening match, a phalanx of Qatari men marched into the Al Bayt Stadium chanting, “Everyone is welcome,” carrying with them a large Palestinian flag. “We are taking care of people in Palestine, and all Muslim people and Arab countries are holding up Palestinian flags because we’re for them,” the flag bearer told the Guardian.

Fans from Tunisia, Saudi Arabia and Algeria have also carried Palestinian flags prominently at matches and worn them as capes around their necks. On Thursday, Randa Ahmer, a young Palestinian woman, stood in Doha’s bustling Souq Waqif holding a Palestinian flag above the international crowd. “It’s our country, we’re going to carry our flag everywhere,” she said, as passersby shouted messages of support.

FIFA trumpeted its agreement with Qatar to allow Israelis to fly to Doha by claiming the deal also allowed Palestinians to make the journey from Tel Aviv, but nearly a week into the tournament, it was unclear how many had been able to surmount the extensive Israeli security checks required to make the journey. Some of those who had made it to Qatar had come via Jordan or Egypt.

As of the beginning of the tournament, nearly 4,000 Israeli and 8,000 Palestinian fans had received entry visas to Qatar, though Israel’s foreign minister said it was expected as many as 20,000 Israelis could ultimately end up going.

A kosher kitchen has been set up near Doha’s airport to provide Israeli fans with a place to gather and food that conforms with religious requirements.

Preparing to arrive in Doha over the weekend, Duby Nevo, an Israeli national, said he was watching the reports of Palestinian activism at the tournament with some concern. “I hope that Qataris are welcoming and everything will be fine,” he said. “I really hope to meet people from all over the world especially from Arabic countries – if they want to make friends. I just want to enjoy [the football], no conflicts whatsoever.”

Another Israeli man, who gave only his first name Bahaa, said the organization of the tournament and atmosphere in the country were excellent, but there was one drawback: “The majority of the masses here do not accept the presence of Israelis.”

Others said they were finding a welcoming environment, but taking precautions. “We’re not afraid to be here in Qatar as Israelis, they are very kind and we don’t feel the politics between the countries,” said Omer Laufer. “Sometimes we say that we are from Cyprus – but just to people from Arab countries.”

As the viral videos have shown, it is Israeli media outlets that have borne the brunt of the lingering antipathy with which their country is regarded by Arab populations, even if many of their governments have now signed agreements acknowledging Israeli sovereignty, started building trade ties and brought their security cooperation out into the open.

Israel’s Channel 13 sports reporter Tal Shorrer told Associated Press that while his interactions with Qatari officials had been pleasant, he had been shoved and insulted by Palestinians and other Arab fans during his live broadcasts from the city.

Aware of the sensitivities of a tournament that will attract thousands of arrivals from hostile countries such as Iran, and where unlike in previous tournaments, all of the estimated 1.2 million foreign fans will be living cheek-by-jowl in one city, Israeli diplomats have produced videos asking their nationals to keep a low profile.

“Downplay your Israeli presence and Israeli identity for the sake of your personal security,” said Lior Haiat, an Israeli diplomat, addressing fans.

When a mobile phone seller noticed his friend’s settings in Hebrew, Shorrer said the man exploded with anger, screaming at the Israeli to get out of the country.

“I was so excited to come in with an Israeli passport, thinking it was going to be something positive,” he said. “It’s sad, it’s unpleasant. People were cursing and threatening us.”

On Friday, a reporter from Israel’s public broadcaster Kan had a more enjoyable brush with fans, mobbed by jubilant Iranian supporters celebrating their 2-0 victory over Wales, who dressed him a jester’s hat in the national colours while anchors back in the studio watched on, laughing.